*** No impacts from tropical systems for Jacksonville/NE Fl./SE Ga. through the holiday weekend into next week...

* The active tropical wave - ‘94-L’ (Potential Tropical Cyclone #2) which came off the coast of Africa a week ago Wed. finally formed into tropical storm “Bonnie” Fri. morning & made landfall near the Nicaragua/Costa Rica border Fri. night as a formidable tropical storm with the tropical cyclone becoming well developed & strengthening while moving ashore. The persistent upper level high remains intact across the Atlantic & U.S. (Lower 48) which means a continued rather straight forward forecast track (due west) across Central America then into the East Pacific while veering more northwest with time off the coasts of San Salvador, Guatemala & Mexico. Once to the Pacific, the system should quickly re-organize & strengthen again likely becoming a hurricane.

There will be no impacts on NE Fl./SE Ga. ... or any of Florida... as well as not any of the Gulf Coast. It is worth noting early season African waves like from which Bonnie was born are often a harbinger of an overall active Atlantic hurricane season.

* A weak upper level low developed persistent convection Thu. night/Fri. to the east of Jacksonville with a surface low evolving not too far from Savannah by midday Fri. which is now moving slowly northeast with the low passing just about right over Charleston near & early Saturday. If the low can manage to get over water intact, there may be some further development. In any case, heavy rain & gusty winds will affect the Eastern Carolina’s into Saturday. There is some westerly shear so much of the heavier convection has trended near & east of the low’s center. 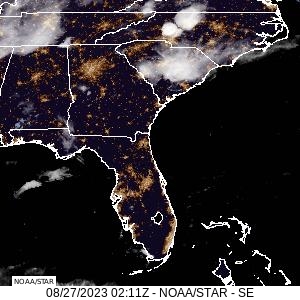 * A tropical wave continues to move into the Eastern Caribbean & is steadily moving W/NW. There has been a burst of convection to the east of the wave axis but shear is strong over the Caribbean & should keep this wave from having much of a chance to appreciably develop. Still - something to keep an eye on, especially in the longer range if conditions become more favorable next week.

* & another active tropical wave has come off the coast of Africa with another to soon follow. None of the long range global forecast models indicate much development - as of right now - but something to track, of course.Wind shear:

The location of development of tropical systems in July since 1851 generally favors the NW Caribbean, Gulf of Mexico & far Western Atlantic: